Have you ever imagined or experienced drifting away from your yacht whilst doing water sports? Wind, current, fog, faulty equipment, bad orientation, loss of your buddy, etc.; the scenarios are multiple, and it seems that they happen more often than people are willing to admit.

The first time I saw a Nautilus Lifeline was in 2013 while working for two new vessels specialising in diving expeditions in the Galapagos Islands. Local park ranger and dive guide Nicolas Schiess showed me one of these small radio beacons and explained that these should be mandatory for all divers within the National Park of the Galapagos Islands. No law supported this, but every diver on board the ships we were working for had to be equipped with one. 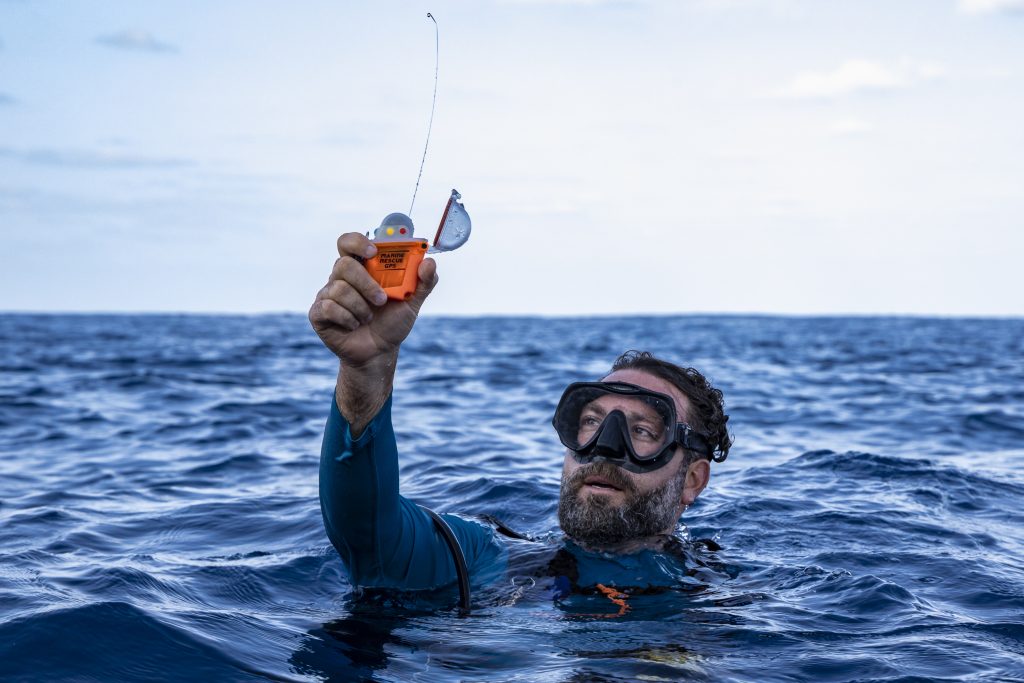 What is the Nautilus Lifeline exactly?

It is an individual, waterproof, and robust radio beacon suitable for any water sport (scuba diving, paddle-boarding, kayaking, kitesurfing, freediving, surfing, remote tender excursions etc.), created and designed to mitigate the risk of getting lost at sea.

A small marine rescue GPS which emits an AIS and DSC signal when activated. The GPS position should be accurate to 1.5 m (5 ft.), and a man overboard distress message (MOB) will be broadcasted to all AIS-equipped ships up to 34 miles away, as well as a Digital Selective Call (DSC) message to the VHF radio on your vessel. The beacon has a test function and an emergency function. The Nautilus Lifeline floats and is waterproof in all sea conditions and is depth-rated to 130 m (425 ft.) with the cap closed. Furthermore, it is free to use, meaning that no MMSI, Licence, or Registration is required. 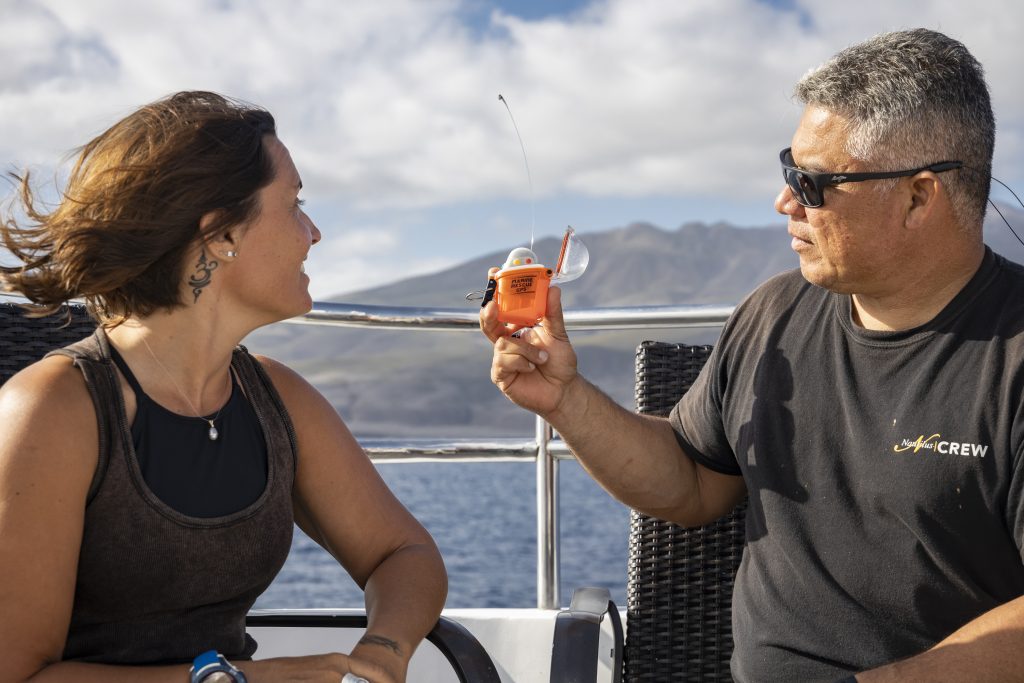 In 2022, as I led a conservation initiative in Fernando de Noronha (Brazil) and shortly after, I headed for a filming expedition to the remote islands of Revillagigedo (Mexico), I decided to get myself one of these Nautilus Lifeline devices.

I ordered one unit online, and in less than two weeks, a much smaller unit than I remembered from 2013 was delivered to my doorstep. I was so excited about the arrival of my package that I wanted to test the Lifeline to understand how it worked. So, I called a colleague whose bridge is equipped with not only an AIS but also an ECDIS, and we decided to meet for a coffee and a ‘false alarm’. We used the test mode of the Lifeline, which appeared on the AIS control and simultaneously on the ECDIS.

The second time we tested the Lifeline, we wanted to try the device from the water, which we did after a dive off the remote island of Fernando de Noronha (Brazil). On this occasion, we decided to send out a MOB distress alarm. It was planned to be very short, and we had previously informed the military radio station, which is the only one on the island capable of receiving AIS signals.

For the DSC signal on the VHF radios, we were interested to see if any smaller boats operating from the island would react to a short DSC call. No other vessels would be in reach from the mid-Atlantic Island at 300Nm from mainland Brazil. All went as planned, and only the largest vessel of a dive operator on the island reacted accordingly to the distress. We realised that the main reason for the lack of response was that few boats from the local fleet had their VHF radio connected to their GPS unit. This unappropriated installation of the equipment might be frequent in Brazil but relatively rare in the yachting or professional industry.

Scuba diving with the Nautilus Lifeline is easy, as its small size allows you to carry it inside your BCD’s pocket or can be attached to your dive gear through a specifically designed little pouch. The pouch has a little carabiner to which the lifeline can be clipped. Even if you do not buy the pouch, a little ring on the beacon allows you to attach a short line to avoid losing it when deployed. 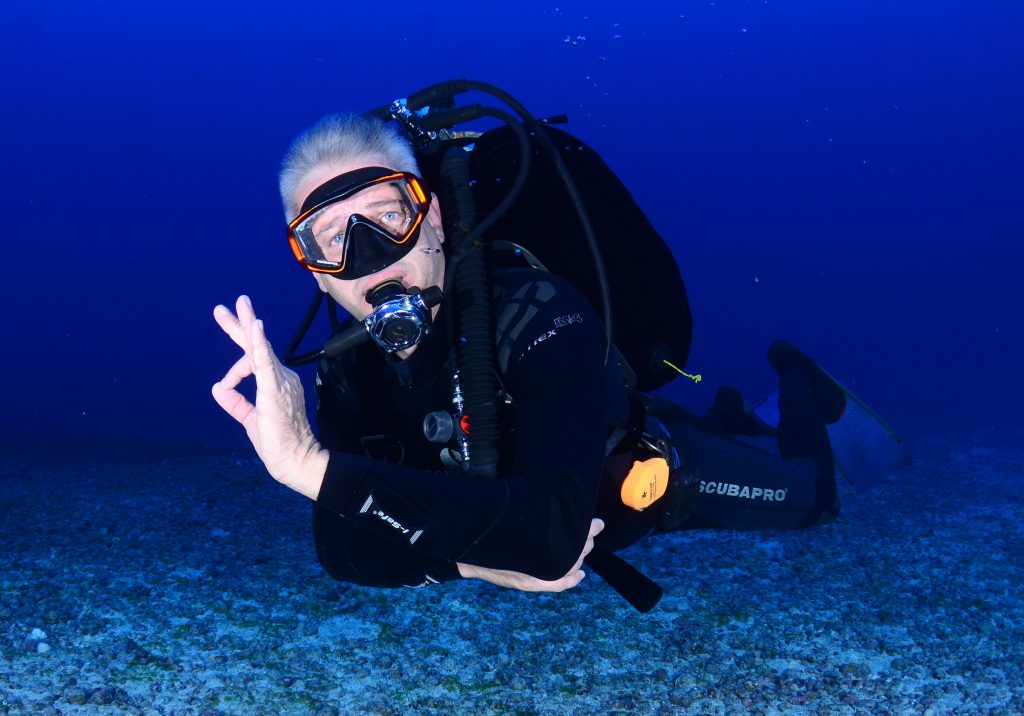 How does the Lifeline work?

Once taken out of its case, its use is straightforward and user-friendly. First, you open the cap and unfold the small antenna before switching on the device through a blue on/off push button that activates a blue indicator light.

Furthermore, a red and a yellow button are available to select one of three options:

Order your own Nautilus Lifeline today!

You can buy the Nautilus lifeline from us online at factory price.

The way it works; is that you order and pay online, and the factory organises a courier that charges custom fees you pay upon delivery.

Included: The Nautilus Lifeline app will allow you to link your Lifeline(s) to the MMSI of your vessel.

User’s manual: Send us an email, and we will be happy to forward you the user’s manual.

Not Included: Import tax: The courier (generally DHL) will charge you the import tax upon delivery, depending on the destination country and the number of units purchased (e.g., in Spain, it was about 83 € for one unit in April 2022).

Optional but Recommended: Purchasing online directly the CR123 battery together with the Lifeline is a good option, as the factory will then send it to you already installed.

Protection pouch: An optional silicone or neoprene pouch is available at the online store to protect your unit. When using in cold water, we recommend the neoprene pouch, which is easy to open even with cold hands or gloves.

When buying the Nautilus Lifeline ONLINE from Dive Operations Buddy, you simultaneously support Marine Conservation projects at no additional cost.

Stay safe out there,

Directly from the factory at NO additional costs.