Superstitious sailors and tales of the sea…

In the older days, when only sails were carried to travel the Oceans, seamen were much more superstitious then nowadays. Prior to modern navigation equipment and mechanic propulsion, these sailors definitely had good reasons for it too. Out of fear for the unknown during their perilous voyages all kinds of superstitions were embraced to keep seaman safe from death, illness, and sea monsters.

Personally, I am not religious but must confess that I did learn praying at sea. I want to share some of these traditions and beliefs which captured my curiosity.

Sailor tattoos were then more than ever a talisman, a reminder of a triumph, a milestone or achievement in ships-life.

When a sailor accumulates his first 5000Nm a tattoo of a SWALLOW on the chest symbolises the achievement. Irrefutably, swallows are known to come home to their nest, year after year, after long migrations. Therefore, this tattoo symbolizes the hope that one always will finds his way home again. A second swallow is added on the chest after this mileage has been doubled. Once wearing one swallow on each chest, no more swallows are added, but for every additional 5000Nm the swallow will release a tear as it seems to have a hard time finding its way back home. After two tears per swallow one should realize that home is far from the sea… Also, when a shipmate is lost at sea, a dagger is drawn through the swallow.

Other “achievement tattoos” are a SHELLBACK TURTLE for the equator crossing, an ANCHOR when crossed the Atlantic, a COMPASS when crossed the Pacific, and a FULL-RIGGED SHIP when rounded the Horn. On the East-side of the globe a GOLDEN DRAGON is the tradition when crossing the International Date Line.

Nowadays you can read all kind of things on the knuckles of tattooed hands but HOLD FAST are the words that cover the knuckles of a sailor hoping for a good grip in the rigging.

When finally, one decides to retire from the sea, a FOULED ANCHOR is eventually the last seafarers tattoo to be added.

To pray for your feet to stay on deck or also out of good luck, a PIG and a ROOSTER are the symbolic animals. The history behind it, is that pigs and roosters were transported in wooden crates which would remain floating when the ship sank. The pigs and roosters would eventually be the sole surviving cargo.

I once was told a story by an older American couple, who sailed several times around the world on their Gaff-rigged Cutter, costing their voyages by playing great music here and there. In 2008, I was sailing in the Caribbean on board “Moana”, a Pahi 63’ designed by James Wharram and sister ship to Mr. Wharram’s own vessel “Gaia”. The American couple sailed by, while we were at anchor off the island of Dominica, asking permission to come alongside to visit Moana. Permission was granted and the couple was welcomed onboard for a visit, and after tasting some Barbados Rhum exchange of sailor stories just happened naturally.

He told me, that while sailing the Pacific, he had heard that the ancient Polynesian sailors always carried pigs on board. When the stars could not be followed during several consecutive days because of cloud cover, they would throw a pig in the water to see which direction it would swim. For some reason pigs always swim towards land, he said, and therefore give indications on the position or the course to steer next.

Sailors use earrings, but in the old days these had to be from gold only. Gold was believed to be a good repellent against ships illnesses, and also was the insurance that their funeral would be paid for. 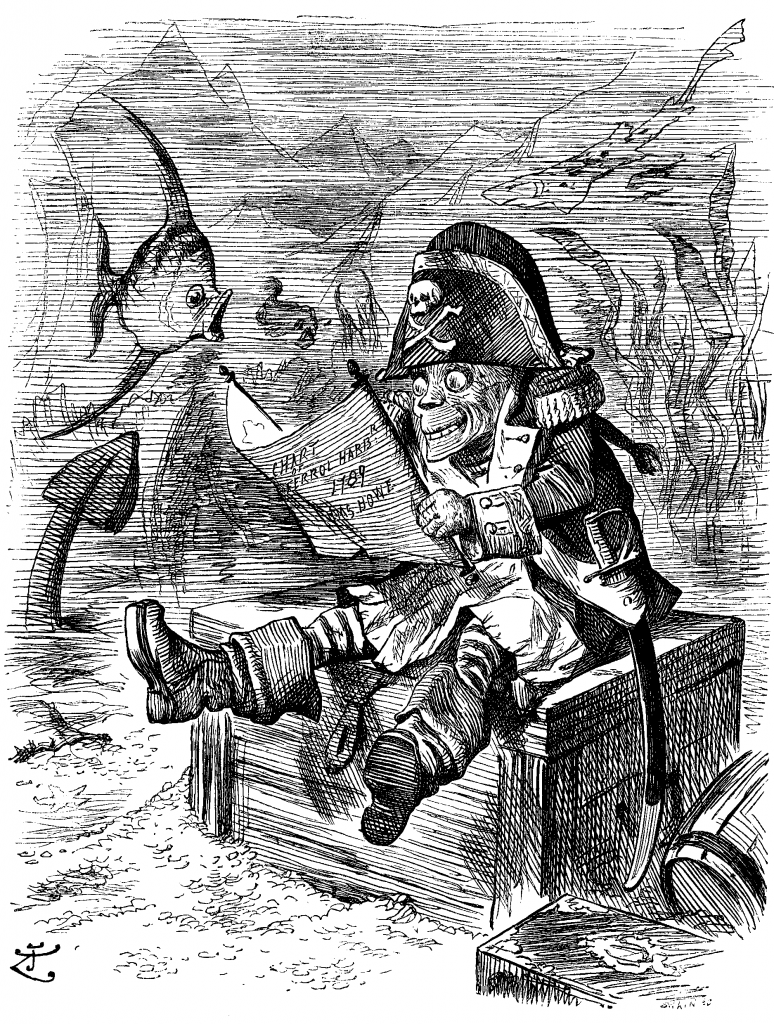 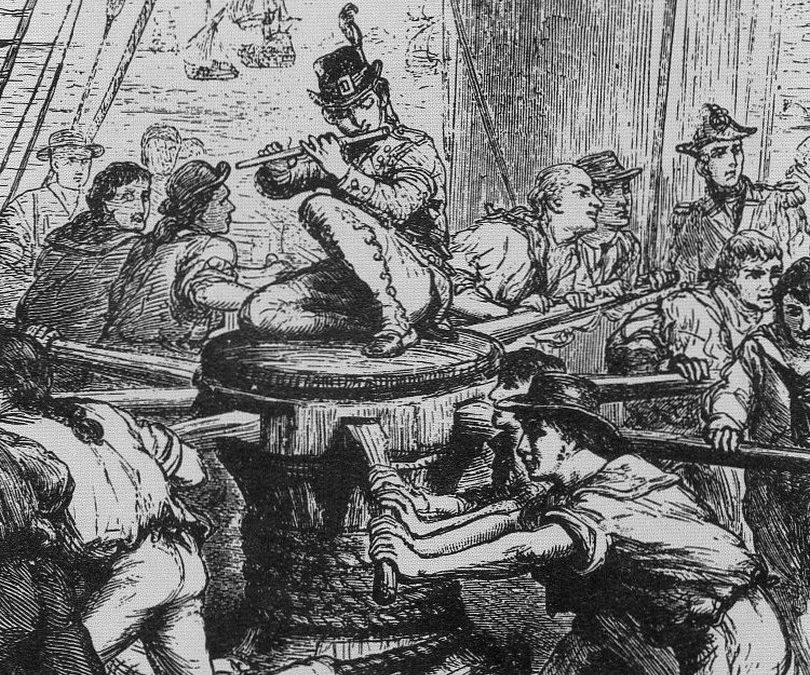 Another tale I was told once, is that sailors were wearing up to seven earrings in memory of geographical areas they had sailed. I was not able to find anything on that in the books or on the internet, and neither do I remember all seven geographical locations I was told that day.

This last one, is the one I know the best as once lived in Tarifa. Imagine how it would have been to sail through the Straights with a square rigger without weather forecast or tide tables. Still today it can be somehow terrifying when you want to sail it, by tacking or gybing in between some of the 350 ships that transit through daily.

Sailing through the Columns of Hercules, battling strong Levante or Poniente, between two continents where two Oceans meet, will always be potentially tricky…but one earring only!

In the early days of cargo barges, the steering-board (rudder) was on the right side, looking towards the bow of the vessel, which became Starboard. The starboard would make loading and unloading of cargo harder for that reason and therefore loading the ship was done on “Larboard”, which later became “Port” in order to eradicate confusion.

During the first passenger crossings of the North Atlantic (Europe to America) onboard sail-cargo vessels, first-class passengers could purchase an upgrade to a POSH bunk. POSH would refer to the fact that they had purchased the right to a bunk which would be on Portside Overseas and Starboard Home, and therefore always allow them to sleep on the lee and not fall out of their bunk.

A POSH cabin would later refer to a luxury cabin in general, and I guess that the name of the cabin slowly mutated referring to its passenger and their distinctive attitude.

Many words cannot be pronounced out loud onboard a vessel, and these words differ from language to language. I will not mention them here, as some green decky might not take it seriously and make the mistake to read this article out loud onboard to check it out. In exchange for my precaution to the greenies I will allow them to know that it is said that sailing out of port on Fridays brings back luck, which obviously allows a weekend ashore before heading out on Mondays.

In shipyard, when you work on a sailing vessel, especially with wooden masts you will find a coin laid under the mast foot of the country where the mast were put it first, wishing these mast to stay put at sea. That or these coins are from the year that the masts were put it as an irrefutable prove of evidence.

I always heard that changing the name of a boat brings bad luck, but I only found the practical solution to the problem when sailing into the small fishing port of Tarifa. An old calafate had a laugh while we were mooring alongside with a boat called Mon Cheri.

A calafate in Spain refers to the artisan who uses oakum (tarred fibre) when caulking or packing joints on the timber on a wooden vessel.

I told him it would bring bad luck to change the name of the boat, what else could I do? The old artisan explained that in the fishing fleet they use to change the name of their vessels by putting their boat on the dry, taking off the propeller, taking off the old name, putting on the new name, putting the propeller back on and splash the boat again. Most of the vessels would ask for a blessing from the priest of the village before heading out at sea or be present at the Catholic boat blessing day La Virgen del Carmen.

Some history learned while sailing in the Arctic region is the one of the Unicorns.

Nowadays it is a famous, fluffy, rainbow-coloured inflatable device…but also this one is related to seamen since ancient times.

After some unknown land, far North, was discovered by Erik Thorvaldson (Eric the Red) a thousand years ago, it is possible that The Pomors were offered that land for free which was “sold” to them as Greenland. I think they must have been a joking or something … well, soon it will be green it seems…but not that much back then anyway!

Beginning of the 16th century some mysterious horn was brought from these Northern latitudes, which belonged to a flying horse called the Unicorn. It was source of magical powers such as the cure against plague, an antidote against poison, or even defeat of death. Owning these powers was the obsession of the ones in power, who obviously were ready to pay highly to those who would bring it to them. The unicorn had to be killed in order to get its horn, which was very dangerous and a rare opportunity. The price of such a horn was paid up to ten times its weight in gold by Elisabeth I, who was known as the highest bidder.

The Unicorn was never seen again, once the scenery in the Northern waters had been reached by trappers, whalers and furtive hunters. It became simply too crowded to keep the secret that the horn apparently is a tusk, and that it actually belongs to strange whale called Narwhal.

Special thanks to Captain John Bardon and Engineer Alex Martz for their input.