Imagine an upside-down jellyfish that is attached to a rock in the sea. Let’s call this creature a polyp. To protect itself from potential predators, this polyp builds a little protective case – a skeleton – around itself. As time passes, the polyp grows and then it divides into two smaller versions of itself. Both of these two new polyps keep building a protective skeleton around themselves and, again, grow until they are big enough to each split in two. This process of polyp growth and division repeats over and over again, resulting in an agglomeration of identical polyps connected via their protective skeleton. Together, this colony of clones form those structures of different shapes and colours that we call hard corals.

Corals are related to jellyfish and anemones, and, like them, they have stinging cells in their tentacles that they use for defence purposes, and to capture prey. But remarkably, hunting is not their primary strategy to acquire food and energy. Instead, hard corals receive up to 95% of their energy from algae that live inside the polyp’s tentacles. Indeed, coral polyps form a mutualistic symbiosis – a close beneficial relationship – with algae that are commonly known as zooxanthellae. The polyp provides shelter and essential nutrients to the algae, while the latter provide their host with energy produced via photosynthesis. 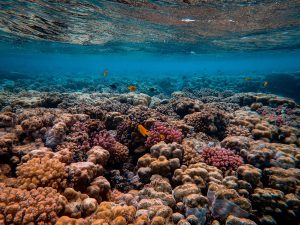 Photosynthesis is the process through which plants like algae produce sugar and oxygen from water and carbon dioxide. This said, corals play a crucial role in carbon dioxide fixation and are essential oxygen producers. Therefore, it may be no surprise that coral reefs are often referred to as “underwater jungles”. Another similarity that they share with tropical jungles is that they are also true hotspots of biodiversity. Although coral reefs occupy less than 0.1 % of our planet’s upper oceans, they provide the habitat for almost one-quarter of all marine species on Earth. Moreover, by building their skeleton tissue, hard corals offer the structure and habitat that millions of other marine organisms use to live, hunt, hide and breed. Coral reefs could thus be described as a city’s infrastructure, providing the fundamental facilities for its inhabitants and thereby constituting a veritable oasis in the underwater deserts of our oceans.

In addition to their significance for the environment, coral reefs play vital roles in our economy and society. They support an estimated 500 million people worldwide by providing food security, income and coastal protection. Adding the importance of corals for diving tourism, fisheries, and their potential for the medical and pharmaceutical industry to the resources they provide, coral reefs have an economic value worth billions of dollars. 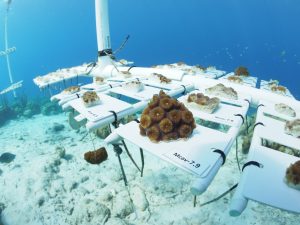 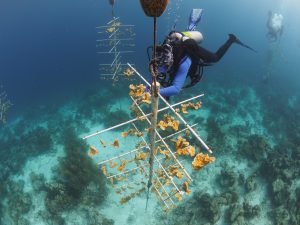 The relevance and significance of corals being undeniable, it is of concern that coral reef abundance and diversity has rapidly declined over the past decades. This worldwide degradation is partially induced by natural causes like storms but is mainly driven and enhanced by anthropogenic (human-induced) disturbances.

Coral abundance is naturally limited by recruitment, which describes the successful growth of coral larvae into adults. However, high predation risk and spatial competition in the early life stage can lead to coral mortalities of up to 100%, thus making this early phase a true demographic bottleneck for coral populations.

Since corals are sessile animals and cannot move away from unfavourable conditions, the success of those that made it through the initial bottleneck phase depends on the environmental conditions surrounding them. A major factor is the sea surface temperature. Corals are found in tropical regions all around the world, where the temperatures are already elevated. In other words, most corals are already living close to their thermal threshold. Climate-change induced rise of temperatures, therefore, poses an incredible threat to our coral reefs worldwide. In the past decades, increased sea surface temperatures have led to coral bleaching events over extended periods. Coral bleaching is the dissociation of the coral-algal symbiosis that becomes unbeneficial when the temperature rises too high. As a consequence, the polyp expels the colourful algae resulting in the coral turning white. With the algae gone, the coral loses its primary energy source. Consequently, coral bleaching is generally followed by high levels of coral mortality.

Another major threat for coral reefs is the phenomenon of ocean acidification. About 40% of the carbon dioxide (CO2) that we release into the atmosphere through burning fossil fuels is taken up by the ocean. As a result, increased levels of CO2 in our oceans lead to a decrease in available carbonate ions (CO32-) in the water column. However, corals require CO32- to build their protective skeletons. Therefore, a reduction of available CO32- significantly diminishes the ability of corals to build their protective skeleton and inexorably leads to coral reef degradation.

Additional stressors such as eutrophication (i.e. increased nutrient levels in the ocean), sedimentation and unsustainable fishing have also contributed to the worldwide coral decline. Altogether, the disturbances mentioned above are direct causes of coral reef degradation and have indirect negative impacts since stress dramatically reduces the resilience of a reef and thereby facilitates global disease outbreaks, which ultimately can lead to coral bleaching and coral death.

The need for coral restoration

Increased frequency and intensity of mass coral bleaching events are dramatically reducing the ability to recover. Together, the lack of natural recruitment and insufficient time between stressful events slow down or even impede natural coral reef recovery. Therefore, the need for restoration methods and management strategies becomes indispensable in preserving coral reef dynamics, structure, and function.

Coral restoration is the process via which degraded, damaged, or destroyed coral reefs are assisted to recover from their disturbances and can include both active and passive restoration methods. A passive restoration is a preventive approach that aims to protect and preserve the original coral reef habitats and allow for natural recovery if a disturbance has occurred. For example, implementing Marine Protected Areas (MPAs) can promote reef health by decreasing potential disruption. Active restoration methods are direct interventions such as coral gardening and transplantation or macroalgae removal that aim to directly increase coral reef health, abundance, or biodiversity. 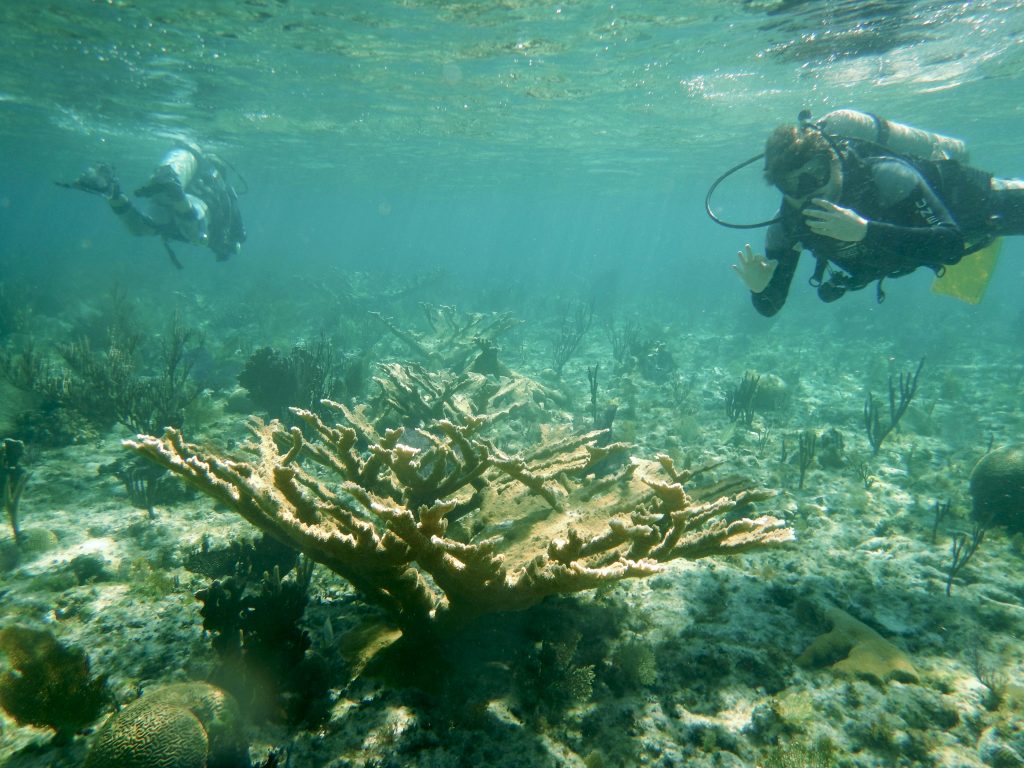 Coral gardening, also known as asexual propagation, is a restoration technique that grows new coral colonies from smaller coral fragments. These fragments are usually produced in a nursery until they reach maturity (approximately 6-12 months, depending on the species) before being transferred back onto a natural reef. Coral gardening nurseries can be either land-based or ocean-based (in-situ). If grown in-situ, coral fragments are either attached to so-called coral trees where they remain suspended in the water column above the seafloor or attached to fixed structures located on or near the seafloor (e.g. cement blocks or PVC/rope frames). In some areas, low-voltage electricity is applied to steel-framed structures that the coral fragments are attached to. The electric current triggers a chemical reaction that coats the steel structure with limestone minerals similar to the limestone created by the corals themselves when building their protective skeleton. Coral fragments growing this way are supposed to grow faster and be more resilient to changing ocean conditions. Unlike nurseries in the ocean, coral farms on land have the advantage that the environmental conditions can be controlled and the risk of predation is low. The latter is especially important when the coral fragments are small. On-land nurseries are often using micro-fragmentation, which consists of cutting the collected coral fragments into very small pieces. The advantage of these micro-fragmented corals is that they grow up to fifty times faster.

While coral gardening is a fast way of generating large numbers of corals, the downside of growing fragments of existing coral populations is that no new genetic variation could be better adapted to the fast-changing ocean conditions. However, another coral restoration technique known as larval propagation or sexual propagation is tackling precisely this problem. By collecting coral eggs and sperm during coral spawning events and rearing the larvae in the lab, this method aims to increase the genetic diversity of corals. The new coral larvae are then either directly settled onto the local reefs or on artificial substrates before being transferred onto the degraded coral reefs.

If coral reef degradation is very advanced, other restoration methods are sometimes necessary prior to coral transplantations. For example, the reef substrate, which is the surface that the corals are growing on, must sometimes be enhanced. This includes removing macroalgae, a space competitor, which restricts coral settlement, reduces coral growth and causes coral mortality and disease. The introduction of artificial reefs is another approach to tackle reef degradation. Precisely, structures such as boats, steel frames or concrete blocks create new habitats that corals can settle onto over the following decades; these new structures can generate entirely new coral reefs. 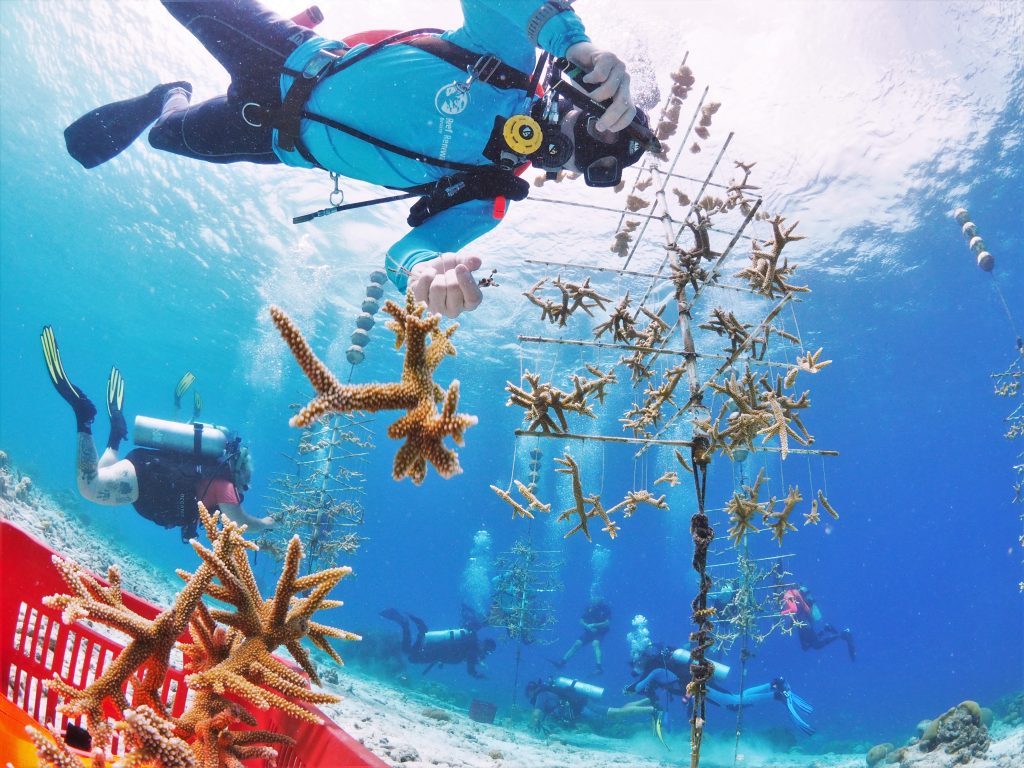 While effective coral restoration techniques are crucial in our race to save our coral reefs, it is essential to realise that restoration alone will not preserve our underwater treasure. Instead, we have to focus on reducing and/or eliminating coral stressors in the first place. To do so, we have to significantly cut down our carbon emissions globally to mitigate ocean warming and acidification. Furthermore, we have to manage threats such as overfishing and pollution locally. Only then does the repopulation and active restoration of coral reefs become relevant.

The preservation of our reefs thus demands an integrative and future-oriented approach, including both active and passive restoration methods. Importantly, successful reef management strategies require regular monitoring of the local reefs and the tracking of restored sites over long periods to [1] quickly detect potential changes in reef health and [2] validate the efficacity of the employed restoration techniques. Ultimately, coral restoration comes down to a race against time: the faster we act now, the higher are the chances of conserving our coral reefs. So, what are we waiting for?

About the Author: Sophie Schoenherr

Our oceans are vast, deep and at times very unpredictable bodies of water that are home to an incredible diversity of life, most of which is still waiting to be discovered. It is exactly this "big unknown" that drives my motivation and determination to study the marine world. 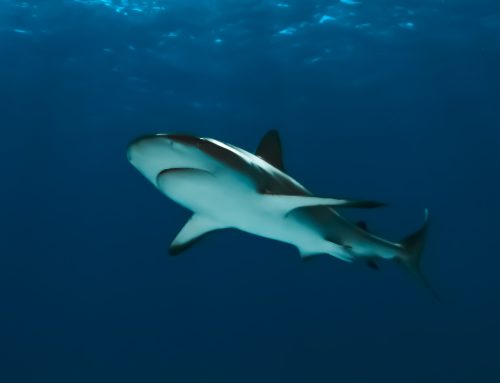 Why not kill all Sharks?